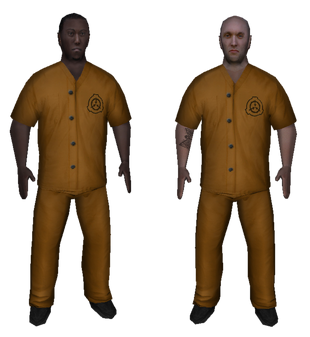 Class-D ("Disposable Class") personnel are expendable individuals used for testing SCPs, notably Keter-class objects. They are unwillingly recruited by the SCP Foundation worldwide and are usually death row inmates. In times of duress, the Foundation will recruit individuals from civilian sources or inmates incarcerated of lesser crimes. Civilians can also 'sign up' to be part of the Class-D program at the Foundation.

Class-D personnel are primarily used as test subjects for studying and investigating SCPs. This usually involves risking the life of the Class-D for the sake of ensuring research.

The player takes the role of a Class-D personnel attempting to escape the facility when the titular containment breach occurs.

Only four Class-D personnel are seen in-game. One is seen being escorted by two guards during the intro sequence. Two are seen in the opening scene inside SCP-173's containment chamber. When the door control system begins to malfunction one of Class-D's will begin walking towards SCP-173 cautiously, while the other will express concern that something is wrong. Once the lights go out SCP-173 will kill one of the Class-D's, the other will gasp and back up before getting killed as well.

The other Class-D is the lure subject used to attract SCP-106 in the recall protocol to re-contain the SCP. The subject would have his femur broken, with his screams broadcasted over the intercom system, luring SCP-106 to re-containment.

In addition there was also another Class-D used as a lure subject to contain SCP-106 in its breach prior to the events of the game, under the designation D-9215.

The Class-D during the intro sequence

The Lure Subject before the protocol is initiated

After the femur breaker is pressed

WARNING: The following may contain spoilers about the game.

D-9341, whose name is later revealed to be ____amin Oliver ___ker, is the protagonist of SCP - Containment Breach. The badge recovered from SCP-1162 suggests that he is a caucasian male with green eyes, who weighs somewhere around 80 kg and is in his thirties.

The nostalgia items seem to suggest that D-9341 was once a level 4 researcher for the SCP Foundation, before being given a disciplinary hearing due to performing unauthorized research on a phenomena called the "Spiral Gestalt." It is assumed that this hearing ruled him unfit for further activities within the Foundation, thus demoting him to classification D.

For the majority of the game he is not seen nor does he speak often, outside of panting when out of breath, coughing and slurping when drinking something from SCP-294, or grunts and gasps when injured. The only time D-9341 speaks is during his exposure to SCP-012.

The player when in front of SCP-012