Edit
WARNING: The following may contain spoilers about the game. 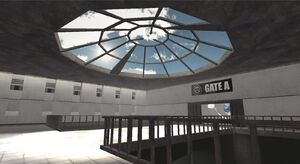 Gate A is the primary exit of the facility that can be entered through its underground entrance tunnel. It is where two of the game's four endings take place.

Gate A is a single room, containing a large blast door labeled "Gate A", as well as an elevator leading to the surface. It has many extended security measures compared to that of the more minor exits and has several guard towers overlooking an outside bridge. On the lower level, there are several roadways that weave through the entrance of the site.

Gate A requires a level 5 keycard to access. The door, however, will not open until the player disables the remote door control system.

Once the player reaches Gate A, several Apaches and Mobile Task Force units will be seen stationed outside of the entrance. If the player has not contained SCP-106, it will emerge from inside near the catwalk. SCP-106 will ignore the player and start to advance outside, escaping the facility via a bridge. Once emerged, Security Chief Franklin will announce SCP-106's appearance over the intercom and order it to be contained. The H.I.D. Turret will power up and shoot a focused beam of light at SCP-106, forcing it to retreat into the Pocket Dimension. After SCP-106's defeat, the MTF units will focus on the player and try to kill them.

There are currently two endings that can be reached at Gate A.