Guards are defensive personnel within the Foundation in SCP - Containment Breach. They are used to maintain the control in the site as well as to guard SCPs and Class-D personnel.

The guards act as defense against possible containment breaches, and to ensure that Class-D personnel comply with orders and do not attempt to escape. Thus far, there are thirteen guards (excluding a few dead guards that appear around the site, often inside inaccessible areas) that can be encountered in the game.

The guards wear a white, full body suit with a black tactical vest overlapping the torso bit. They wear black balaclavas and a black riot helmet with a yellow visor, obscuring any facial detail. They also wear black gloves, black shoulder pads and combat boots, with their weapons being an FN P90 with a green ACOG scope attached to the top rail.

Agent Ulgrin is a minor character who acts as the player's escort during the intro sequence.

In the Class-D Cells, Ulgrin will open the player's cell and tell them that they are needed for testing. If the player refuses, the guard will lock the door and activate the gas valve gassing the player to death.

Upon cooperation, the guard will tell the player to follow him to SCP-173's containment chamber. He will lead in front, while another guard follows behind, both guards casually conversing en-route to SCP-173's chamber. If the player refuses to follow the guard, then he will shoot them.

After the breach, Agent Ulgrin and Security Chief Franklin can be seen inside the intro office. Franklin will alert Ulgrin of SCP-173, which appears directly behind him. The two then proceed to back out of the room, both watching SCP-173. If the player attempts to go near Ulgrin during this sequence he will open fire on the player.

Ulgrin can later be heard conversing with another person over channel five of the radio. He will claim that Dr. Maynard is still inside the facility, suggesting that he has already escaped the site by the time this conversation takes place.

Upon opening the cell

Upon exiting the cell

If the player refuses to exit their cell

When Ulgrin decides to kill the player

After being killed by Ulgrin

While en-route to SCP-173's chamber, Ulgrin will start talking to the guard walking behind the player

Upon Franklin seeing SCP-173 in the intro office 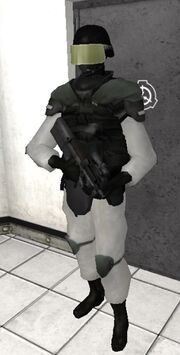 Another guard can be seen when walking out of the class-D block, notable by his slouched back stance. Music can be heard blaring through his helmet.

Should the player escape their escort, the guard will tell the player to halt before opening fire on them. 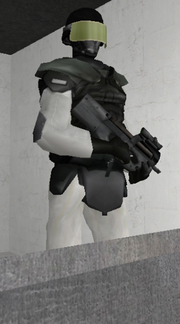 In SCP-173's containment chamber, a guard can be seen manning a look-out post. If the player refuses to enter the chamber then the guard will be ordered to terminate the player. Once SCP-173 kills the other two Class-Ds inside the chamber, the guards begins to panic and open fires on 173 shortly before it ends up killing him as well.

When SCP-173 starts killing the other Class-Ds

Upon SCP-173 appearing right next to the guard 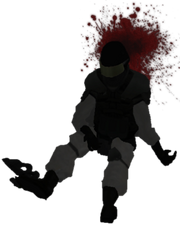 Before entering the hallway leading to the WC, a guard can be heard sobbing, praying and whimpering quietly. As soon as the player enters the room the guard will then panic and shoot himself. His body can be found sitting up against the wall with his FN P90 next to his left foot and a blood splat behind his head.

When the player enters the room.

As soon as the player enters the small server room a guard can be seen on the other side of a window with SCP-096. As the guard is contemplating on how SCP-096 got out, SCP-096 turns around and he accidentally views its face, causing it to become enraged. The guard attempts to shoot SCP-096, but it leaps towards him and begins ripping his body apart, causing blood to splatter across the windows.

Upon entering the room

When SCP-096 leaps at the guard

The Elevator after the guard walks in.

When the player enters the elevator room, the player can get a quick glance of a guard entering the elevator. Shortly after the guard enters, the elevator crashes back down to the current floor. The door can then be re-opened, revealing large stains of blood on the walls and floors.

After the guard walks into the elevator

Izumi Junko was an agent who was sent into SCP-860-1. After SCP-860 had materialized in front of her, the site decided to send her into 860-1, as the last person to have the key appear in front of them committed suicide. She was apparently eager to enter the forest, since she was not exposed to any of the previous exploration logs.

The player can find several notes left by her inside SCP-860-1, indicating that anomalous events were happening during her stay in the forest, such as her headset playing soothing music and the path turning into cobblestone instead of the regular dirt. She appears to think that the forest has a welcoming atmosphere. In the last note she directly refers to D-9341, saying that she has been expecting him and that she is "kinda hungry". Her fate is unknown. When traversing SCP-860-1, the player has a chance of seeing her silhouette in the trees.

Izumi Junko is the second subject sent into SCP-860-1 who has been "welcomed" by the forest, the first being the Class-D from Exploration Log II. Interestingly, both of the subjects were female, while all other subjects including D-9341 were male and invoked hostile reactions from SCP-860-2.

Two guards can be found in SCP-049's containment chamber, having been turned into SCP-049-2 instances.

Before it was replaced by an SCP-008 infected human, an SCP-049-2 guard would have appeared in the Medical Bay.

At Gate A two guards can be seen standing in the large gate towers. They only serve as visual aesthetics.

Agent G. is a guard at Gate B who can be seen on top of a large building overlooking the entrance and courtyard. He will attempt to shoot the player when they pass through the courtyard but the distance between him and the player makes his aim inaccurate.

His name is a reference to the forum user of the same name.