Joke SCPs are SCP characters/objects that exist in the game as novelties and comical value, and can be classified as easter eggs. They're technically non-canon with the SCP Foundation.

SCP-420-J, known as "The Best ████ in the World", is a Safe-class joke object that can be found in the head office, which requires a level 4 or higher keycard to enter. Two joints of SCP-420-J can be found on the table in the room along with a document and a readable screen in the room. Entitled "Some SCP-420-J", using the item will cause the file Mandeville.ogg to play, a slight "blur" when the player moves, and a text to appear at the bottom of the screen saying, "MAN DATS SUM GOOD ASS SHIT", presumably said by the player. If the player is wearing SCP-714, SCP-420-J will have no effect prompting the text to appear as, "DUDE WTF THIS SHIT DOESN'T EVEN WORK". SCP-420-J can also cure the nausea brought on by the strange bottle and heal injuries.

Putting SCP-420-J through SCP-914 will give the player a number of alternates from it, the exact form depending on which setting that SCP-914 is turned to. Putting SCP-914 on "1:1" will result in a cigarette, which will disappear when used and cause one of a few different messages to appear. Putting it on "Fine" will result in a joint and "Very Fine" will result in a smelly joint, and, if either is consumed, it will kill the player. A message is also shown that reads, "UH WHERE... WHAT WAS I DOING AGAIN... MAN I NEED TO TAKE A NAP...".

SCP-789-J, entitled "the butt ghost!!" on the Foundation Wiki, is a Safe-class joke SCP object. The player can encounter SCP-789-J by entering the WC room. Going near a toilet will cause a sound file to play, saying, "I am the Butt Ghost. I will eat your butt!". It serves no other purpose than comic relief. 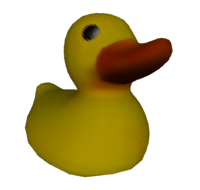 Anomalous Ducks are easter egg objects that can be found scattered here and there throughout the game. One duck appears in the two-level office, which will teleport when the player blinks, usually to three or four different places around the room.

The last duck can be found in the server farm, where it rotates toward the player after they blink and levitates off the ground for a couple of seconds randomly. This duck is most notable because it is a color of white instead of yellow like the other two.