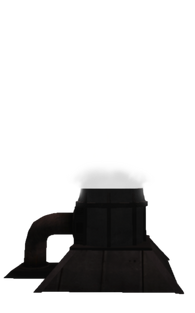 SCP-008 is a complex prion, the research of which is highly classified and primarily aimed at preventing research which may lead to the synthesis of SCP-008 in the distant future. Traits of the SCP-008 prion include:

SCP-500 has been recorded to completely cure the effects of SCP-008, even in the advanced stages of the disease.

SCP-008's containment chamber can be found in the Heavy Containment Zone. Upon entering the chamber, the player will find the canister containing the SCP-008 samples open and releasing gas. SCP-173 will spawn in the control room adjacent to the chamber of the canister.

The canister may be closed, which will stop the gas from flowing; however, SCP-173 will eventually break through the glass in order to kill the player. If the player is not wearing the Hazmat Suit, which can be acquired in the small chamber before 008's chamber, and has yet to close the canister, they will be wounded by a flying shard of glass, contracting the SCP-008 prion.

The longer the player is infected with SCP-008, the more predominant the red in the player's vision will become and the louder the auditory hallucinations become.

Eventually, the player will black out, becoming an infected.

SCP-008 and its side-effects can be cured completely by consuming a SCP-500 pill or using SCP-427, with the latter happening over a period of time which increases the more the player has been affected. 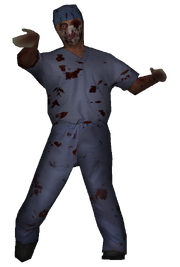 The infected player approaches a scientist.

A subject that is fully infected with SCP-008 is referred to as an infected.

When a person is fully infected with SCP-008, their body undergoes a period of sporadic cellular necrosis, with the surviving tissue assuming its original function while being highly resilient. The red blood cells inside the victim's body greatly increase oxygen storage capacity, resulting in slower blood flow and increased muscle endurance and strength. The body's metabolism may decrease to extremely low levels, allowing subject to survive for over 10 years without nutrition.

The subject can adapt to its damaged nervous systems but is limited to basic physical activities, including standing up, balancing on two legs, walking, biting, grabbing, and crawling. They will energetically move towards sights, sounds, and smells it associates with living humans and will attempt to ingest them if physical contact is made. Neutralizing fully-infected subjects requires significant cranial trauma.

After the player is completely infected with SCP-008, they will black out. An event will then take place where D-9341 will slowly approach a researcher who is pleading for help. The player will begin to devour the researcher and then get shot by Nine-Tailed Fox.

An infected surgeon can be found inside the medical bay. Upon entering the main room, the lights will black out and the corpse will reanimate, pursuing the player across the facility.

Should the player get slashed by the infected, they will be inflicted with SCP-008.