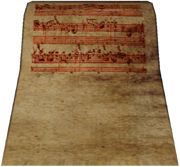 SCP-012, also known as "A Bad Composition", is a harmful SCP object in SCP - Containment Breach.

SCP-012 is an old musical score entitled "On Mount Golgotha". The object appears to be part of a set of sheet music, and is incomplete. The dark red ink, originally thought to be berry dye, was later revealed to be blood from multiple subjects. The song itself is a cacophony, lacking correlation and harmony between instruments.

SCP-012 is located in a containment chamber that requires a level 3 keycard to access. When opened, the player can travel down a flight of stairs and find a control panel.

If the player steps far enough into the containment area, SCP-079 will open the door to SCP-012's containment room. Unless the player resists it, they will move into the room where SCP-012's safe has been opened and lowered, and the track "On Mount Golgotha" will play while within the room.

The player will inflict damage to themselves and attempt to finish SCP-012 if they are pulled in to the point where they are standing in front of the object. They will mumble to themselves, proclaiming it to be "impossible to complete", along with other insane ramblings. If the player does not leave the containment, they will eventually die from blood loss.

The player can fight for control of themselves by walking and looking away from SCP-012, allowing them to flee the chamber. If they have damaged themselves, they will also be bleeding as they leave the room, which will require healing with a first aid kit. The player will begin bleeding from when they get the message "You tear open your left wrist and start writing on the composition with your blood." onwards. As the player damages themselves more and more, lines will start appearing on SCP-012 and the player will begin laughing manically.

The memetic effects of SCP-012 can be negated by wearing either SCP-714, the heavy gas mask, the super night vision goggles, and heavy hazmat suit. When worn, the player will not harm themselves, ramble, or be drawn to the composition. Even if the player stands in front of the composition, they will not begin damaging themselves.

SCP-035 mentions that if the player "reads between the lines" of SCP-012, it can be used as a map. This however is not true and is simply 035 attempting to get the player killed.

Community content is available under CC BY-SA 3.0 unless otherwise noted.