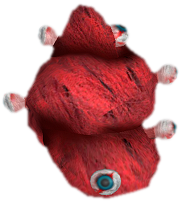 SCP-066 is an amorphous mass of intricately braided thread weighing approximately one kilogram. Stuck between the threads are what appear to be eyes, resembling those of a human. It displays significant mobility, primarily in the form of being able to move portions of itself at very high speed. It will automatically produce notes and effects in the presence of any human, regardless of whether that human interacts with SCP-066. This process takes a minimum of six seconds.

When it is not producing anomalous effects, SCP-066 will say the name “Eric” constantly in a deep masculine voice.

SCP-066 can be encountered in the proximity of the cafeteria, scurrying across the floor. When it sees the player, it will begin scurrying towards them, produce a random sound, then scurry away. SCP-066 will also open and close doors around it.

On occasion, SCP-066 will play Beethoven's Second Symphony's at a loud enough aptitude that it will temporarily deafen the player. After a short while their hearing will come back.

Besides producing sounds, SCP-066 can crack the floor around it, as well as dimming the lights. It will also cure any effects from SCP-966.

Notes from the tune 'Happy Birthday'