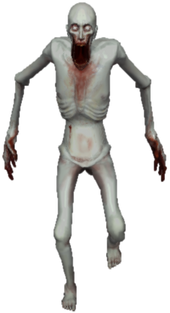 SCP-096, or "The Shy Guy," is a hostile humanoid SCP encountered in SCP - Containment Breach.

SCP-096 is a humanoid creature that is normally extremely docile. However, when someone views SCP-096's face it will enter a stage of considerable emotional distress. SCP-096 will cover its face with its hands and begin screaming, crying, and babbling incoherently briefly before chasing down the person who viewed its face.

SCP-096 will not stop until it reaches the person's location, after which it will proceed to kill them. Afterward, it will regain its composure and become docile once again.

When docile, SCP-096 will passively approach and follow the player. Should the player ever view SCP-096's face, it will enter an agitated state and will begin to cover its face and panic. Shortly after, it will start chasing the player down to kill them.

SCP-096 is extremely fast and cannot be deterred by doors or elevators, regardless of whether or not they are locked, as it will rip them open to catch up to the player. Once it catches the player, it'll tear apart their limbs and devour them. Death is unavoidable once SCP-096 is triggered.

When not triggered, SCP-096 will randomly wander around various rooms in the Heavy Containment Zone. Specifically, it can spawn in the following rooms:

SCP-096 also appears in the small server room where it brutally kills a guard that accidentally viewed its face. The player has to reset the power so they may escape from the room, due to the doors becoming locked after entering the control room. SCP-096 itself will wander around the room, making it difficult to avoid looking at its face.

SCP-096 can also spawn in a lockroom, where it will be sitting down in the center of the room around several blood splatters. It is easy to avoid SCP-096 in this room since the player can just walk around its back to reach the next room.