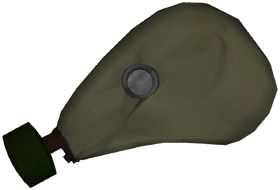 SCP-1499, referred to as "The Gas Mask", is an item that can be equipped in SCP - Containment Breach.

The anomalous effects of SCP-1499 activate when a human places SCP-1499 on their head. Approximately one second after SCP-1499 is fully secured on the subject's head, the subject vanishes from view, and is no longer detectable.

The victim is then transported to a barren and inhospitable landscape, with tall black towers filling the area. Upon removing SCP-1499 from their head, the subject will reappear in the same location they were in when they put it on.

SCP-1499 can be found inside a wooden box in its containment chamber.

The landscape primarily consists of large, black stone structures that are either grounded or suspended in mid-air. The player will initially start off outside what appears to be a church, where they can enter it and and find an audience of SCP-1499-1 instances. Another instance can be seen on a balcony overlooking the audience. If the player lingers for too long, the audience will face the player and the rest will chase him. The player may also wander the landscape, and small groups of SCP-1499-1 can be found.

Putting SCP-1499 through SCP-914 on "1:1" will refine it into a standard gas mask. Refining SCP-1499 on "Fine" grants the player infinite sprint when traveling inside the dimension, and "Very Fine" refines the gas mask into a hostile SCP-1499-1 instance.

SCP-1499-1 instances are tall, nude humanoids with dark skin laced in a thick coat of an unknown viscous substance. They possess a large number of eyes and mouths around their body. The left arm of each instance is also noticeably warped.

SCP-1499-1 instances appear all over SCP-1499's landscape. They will begin wandering aimlessly around the dimension, occasionally stopping to stroke their head.

Once the player come into close proximity with a mobile SCP-1499-1 instance, it will begin moving away from them. If the player approaches a stationary one, it, along with every other instance in the landscape, becomes agitated and starts pursuing the player. Making any further physical contact with an instance will result in them slashing at the player.

It is possible to create SCP-1499-1 instances outside of SCP-1499's dimension by running SCP-1499 through SCP-914 on the "Very Fine" setting. Instances created in this way will immediately become hostile and pursue the player.

Upon the player aggravating an instance