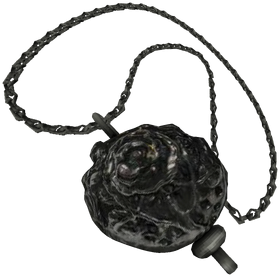 SCP-427, or the "Lovecraftian Locket", is an SCP object that can be obtained in SCP - Containment Breach.

SCP-427 is a small, spherical, ornately carved locket made of a polished silver material. It was created after placing a pill of SCP-500 in the Input booth of SCP-914 and using the Fine setting. It displays no unusual activity when closed. When SCP-427 is opened and exposed to biological tissue, it rapidly regenerates cellular damage and somehow is able to purge invading compounds or infections. However, long-term exposure produces a significant health hazard. As the locket heals damage, it optimizes the body's natural systems. People exposed to the device for over an hour total began mutating into a shapeless mass of tissue referred to as SCP-427-1.

SCP-427 is obtained by putting a pill of SCP-500 into SCP-914 on the "Fine" setting. When the locket is opened, it will slowly heal the player of any injuries or blood loss they've sustained, as well as slowly cure them of SCP-008's infection. However, if the player keeps the locket opened for too long (7 minutes specifically) then they will become an instance of SCP-427-1, killing them.