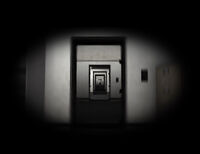 SCP-970, also known as "The Recursive Room", is an SCP encountered in SCP - Containment Breach.

SCP-970 is a spatial phenomenon wherein a collection of rooms are looped on themselves. In all cases found, this is by means of a series of doors appearing in the walls, all in a straight line, such that it is possible to walk forwards and end up at the starting position. The alteration to the rooms does not affect neighbouring rooms and floors.

SCP-970 affects a 2-way hallway and storage room in the Light Containment Zone. Inside the storage room is a level 1 keycard, a 9V battery, SCP-939's document and an empty cup. As the player walks through the looping doors, several changes in the environment can be noticed: