After the release of v1.0 updates for SCP - Containment Breach started becoming less frequent, to the point where it seemed like development on the game had come to a close. This was up until April 15th, 2016, on the 4th anniversary of the game's initial release, where Regalis released a video in celebration of this milestone, stating "A big thank you to everyone who’s played the game during the years, all the people who’ve helped with the development and everyone else who’s been following and supporting the project!". Alongside this video Regalis announced that v1.3 of the game was being developed in cooperation with Third Subvision Studio.[5]

After the release of v1.3.11, Third Subvision Studios stopped working on the game and Undertow Games began exclusively focusing on their next game called Barotrauma. 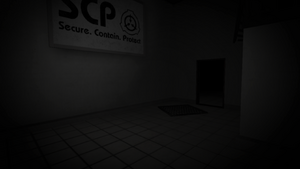 An example of blinking.

An example of blinking. The main mechanic and gimmick of SCP - Containment Breach is blinking. Blinking is measured by the blink bar on the HUD. When the blink meter depletes completely, the player will forcibly blink, causing their vision to go black for a brief moment. It is important to keep in mind when encountering SCP-173, as it can get closer to the player between blinks. The player can blink manually by pressing the spacebar, as well as shut their eyes for an extended period of time by holding down the key. It should also be noted that if the player is being stalked by SCP-372, they can see it skitter by in the corners of their field of vision when blinking.

When the player encounters a threat that does not kill them instantly, they will begin to bleed. This injury system will affect the player over time, causing them to wobble when walking, blurred vision, and slower movement. Should the bleeding become severe enough the player will be forced to crouch. The severity of the wounds and/or their placement will affect how much the player bleeds. If the player bleeds for long enough, they will die. Using a first aid kit or Eyedrops from SCP-914's "Fine" setting will alleviate blood loss. The only way to alleviate the wounds is by using a first aid kit or SCP-420-J.

The Heads-Up Display measures blinking and sprinting by using bars on the lower left screen. The blink bar is always depleting, while the stamina bar only depletes when the player is sprinting

Additionally, an FPS (frames per second) counter at the top left of the screen can be enabled in the options menu.

Select any difficulty to view their in-game description.